AN OPEN LETTER TO NANCY PELOSI, SAN FRANCISCO 2007
To: U.S. Representative Nancy Pelosi:
You are the only person of power we on the progressive left can approach, because of your position as Speaker of the House: you could re-structure the dialogue in this nation, and some would say you could single-handedly save it in a totally unique and American way.

We beseech you to ignore Republicans, Democrats and so-called Progressives who have conceded impeachment in toto.

Impeachment, Censure and Congressional Investigation allow us as citizens to monitor our leadership. They are important tools of state that must be exercised actively to keep balance. We feel you know this, but are being roped into a position of pseudo-neutrality by National and Federal pressures in your role as Speaker, and so, as constituents, here in the Bay Area, we urge you to reconsider, to take a new approach and to save this country from despotism.

Representative Pelosi, you will be greeted by a flood of support from the grassroots level if you take this on. You could revolutionize the argument. You could be the one in Washington who says, “This has nothing to do with the upcoming primaries or the Election of 2008 – this has to do with what this country wants revealed by this Administration now, before another can take over, before they are out of the reach of public accountability.”

Make History: We ask you to have a public change of heart and to step up to being the ethical and cultural conscience of our nation at this tense moment in history when this very unpopular administration has us poised to begin world war against Russia and Iran on bogus intelligence and false claims against another of West Asia’s ancient centers of culture.

The Cheney/Bush agenda for tactical nuclear strikes on Iran is aggressive, frightening and – exactly like the agenda against Iraq was – illegal, unconstitutional and against our country’s fundamental values. Yes, Ms. Pelosi, I am accusing them of lying and deceit in the engagement of their war in Iraq – the Persian Gulf War Two. I accuse them of great, staged manipulations in their idiotic War on Terror. Many at home and abroad fear greatly that they are engaged secretly in practices to do this again, thus: If we do not impeach Cheney and Bush then they will bomb Iran … with or without our sanction.

The only way to regain control of the U.S. American government from this kind of despotism is to actively promote transparent investigation of every single corner that Bush/Cheney has labeled “National Security,” to do the same with this War on Terror.

Demand the Administration open these to Members, in private or a special committee, if not publicly. Look into the requests of Constitutional scholars and others who see criminality in their behavior. Yes, definitely Investigate and Impeach Cheney; and be proud of taking this Bush government up loudly and on the record, because future generations will vindicate you. The lies, conflicts of interest and criminal acts are provable, apparent.

Bush, Cheney and the Neoconservatives:  Rumsfeld,  Ashcroft, Perle, Wolfowitz et. al., must be questioned. They have lied to the United Nations and our own people, and are universally being condemned for this. Our only hope is to show the rest of the world that our system here in the United States does have in place the means to check itself, when it is so obviously occupied by despots. That is what Impeachment and Censure are for. The world waits for us to take these people to task. Congress must open up the Bush/Cheney administration before it leaves office.

It is imperative to the future of our country that we force them to testify and tell us what has been going on in our name in their so-called war on terror. The successes they trumpet turn out to be staged and often involve terrified innocents. Their failures in Iraq and Afghanistan are riddled with criminal activities in prisons, in the field of battle and in the streets. There are hospitals and villages where our soldiers are feared and despised.

Please, Representative Pelosi, look deep into the future of this country, summon the courage and do what you do so well. Stand with your colleagues in the House who cry for Congressional Investigation of Cheney/Bush – that includes Impeachment and Censure, if necessary. It is an absolute necessity before the U.S.A. can pass one more law or engage in one more battle.

At the Blue Angels Show in SF, I had just turned my brand new digital recorder on, set levels and was telling BPW, my partner’s younger sister what it was … when the show started and a jet screamed directly above our heads.

This audio has not been tweaked in any way. It is the actual .wav file recorded by the handheld digital recorder. 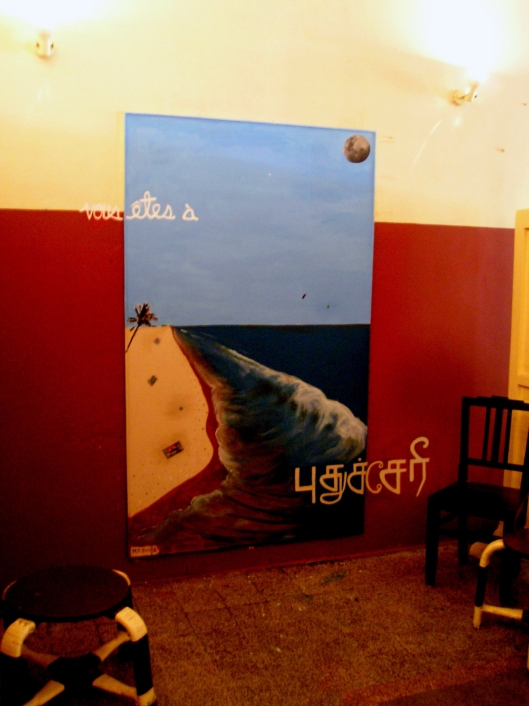 At 40, in my homeland, I painted, collaged and signed, Vous êtes à Pudduchcheri, M.T. Karthik, on the back of the wood liquor cabinet installed in a wall at Qualithe’s Hotel Bar in Pondicherri, Pudduchcheri, Tamil Nadu, India in three weeks in May, 2007.

The cabinet is 84 x 50 inches, 6.5 inches above the floor, and the wall is perhaps  fifteen feet wide. It was immediately interesting to toy with the line dividing the lighter upper from the darker lower layers. The text was decided upon after weeks of discourse with locals and regulars – and translates in English to: “You are in Puduchcheri”

The image of the moon is an actual photograph taken in 1971 by telescope from observatory of the University of Montana.

The oil well is from the back of the old,purple Indian 1-rupee note.

I photographed the haliastur indus (brahminy kite), pair, myself, from my studio for nine months, and then printed and selected the images of the two raptors collaged into frame – male and female.

The palm tree was photographed at a local beach as well.

The postage stamp is the a magazine reproduction of the first stamp issued by independent India.

the detritus on the beach includes a matchbook and wrapper from a package of firecrackers, and the tiger from the tiger balm packaging.

art students from the Chitra Kala Parishath art college in Bangalore, were invited to add depth to the waves and a second heavenly body, a single white point representing Venus, over the sea.

Over the last few nights, lit by an obese moon, the local animals have been fighting; first the dogs went at it ferociously; then loud, wailing cats; hissing, crying, haunting sounds. Then a crazed bird-fight, filled with screeching – all this in the two nights of the moon’s fullest face.

The village is a breathing thing, a living ecosystem of many species of insects, reptiles, mammals and birds living adjacently. The village mood is governed communally, first by the most powerful forces of nature, primarily the sun and moon – and, here, the sea – and secondly, by humanity in concert with nature.

In working with nature, humanity is further subdivided, along a continuum from those who will care for animals and plants, to those who would not tolerate them, but as food. Most follow a gentle co-existence.

A properly functioning village can be considered among the most sane and balanced social ecosystems ever created by human beings. Interspecies tolerance, collegiality and an awareness of the fundamental interconnectedness among all living things exists.
Here, vegetarianism is considered a social enlightenment for most people. Trash is often laid out on low thistle or brush to allow ants and other insects to pick it clean. I have watched a village woman wash the anus of her cow with her bare hand and water with such care as she would give her own child.

The village is asleep shortly after sundown. It gets dark quickly. Public lighting is elegantly limited to one or two long, narrow, tube lights, atop wooden posts placed at the intersection of paths or at the gate of one of the wealthier homeowners. But power outages are common, eliminating even this small amount of soft, light pollution. The night sky is clear, the stars, sharp.

Dawn is the loudest time of day, from cock’s crow, through crow’s caw and eventually multiple, staticky, jam-boxes, and at least one television set, projecting bhajans and popular songs. This comes to an end abruptly, when there is a brief silence into which the cow next door lows – an enormous sound – at least once each morning. Today, all sound was overcome by a single, overpowering noise, a retort, by human design, repeated at regular intervals. Someone was lighting and dropping grenade-like bombas.

This same, single, very powerful firecracker, set off very near to this house every half hour or so, was irregular enough to feel sudden each time – 9:30, 9:55, 10:27. The noise hit me in the gut. The dog was terrified.

It is an intense sound in this place – and now the cat fight continues, screeching and hissing, tearing-around sounds between booms.

Bombas all day long: “someone died” is the best we have. Sekar says it was two people, one on either side of us, in recent days. The villagers gathered with firecrackers, drums and flags – multiple very loud retorts all day long; many right now.

The dog stayed under the bed for hours, until sundown when the bombas finally ceased – we all sat in silence. Then, through the night, under the flat, bright light of the fat waning moon – really three days full –  came the horrible, sad, wailing of a woman who sounded like a widow, or a mother, begging God or anyone to explain “Why?” between heavy, interminable sobs. She finally fell asleep, but her cries were the loudest sound in the night for an hour. The death must have been literally just beyond the wall to our West.

The entire village is a part of the death – even the crows were vacated by the noise. They say that when a king dies, crows fly and caw – maybe it’s because of the fireworks. This full moon there was an important death, likely two, in our village. The crows and dogs and cats know it … and I know it, too.

[discovered that one of the two deaths was L’s grandmother –  the mother of the man from whom I’ve been leasing a motorbike. We learned, too, that there was another death, just next door to us – very close to us, on the same day – likely someone we had seen daily in the last few months – but we don’t know whom. I would know the face … but which face, of the last few months, is missing now? that I cannot say. So it was Usha,  the daughter- in-law of one of the deceased, who told us, three weeks after Pongal, that the villagers did not celebrate Pongal this year because of these deaths, a full moon before].