When I awoke on Thursday the 20th of January of this year, the temperature in the city had dropped thirty degrees from the previous afternoon when I arrived. It was 14°F and snowing. It would be my first day walking around in Manhattan. I wasn’t ready for twenty blocks in that. It’d warm up later, but to make my museum time I’d have to take a cab.

Protocols of the pandemic required me to buy tickets not only to attend the opera, but the museums as well. A week earlier, I had made the first available appointment at MOMA, set for 10am, expressly to see the last week of the Joseph E. Yoakum retrospective exhibition.

The thinking was to let small groups in, separated by twenty or thirty minutes to reduce crowding and encourage social distancing. We were all masked, vaccinated and boosted, also by protocol. All visitors had to make appointments and book time slots.

My cabbie, Abdullah, turned down WBAI on the radio to talk about how things are in Manhattan, now. Of course he didn’t live in Manhattan, he couldn’t afford it. It was becoming not even worth it to come to town because nobody was around to flag cabs.

He told me he sees no one in the streets except cabbies and delivery drivers or riders. He said nobody goes outside – they ordered everything to come to them. It had been like that for more than a year.  “You have to be a millionaire to live in the city. It’s a city only for the rich,” he said, “We used to call Fifth Avenue Millionaire’s Row, now we have Billionaire’s Row.”

Abdullah was referring to the new skyscrapers at the southern end of Central Park, like Steinway Tower, 11 West 57th, on the most expensive street in the world. When you consider the building’s height-to-width ratio, it’s the world’s skinniest skyscraper. The 1,428-foot tower is 24 times as tall as it is wide, with only one residence on each floor.

I saw the Billionaires Row skyscrapers briefly from the plane, but the skinny skyscrapers were, in fact, a little difficult to spot from street level.

Later in the day I’d be seeing them again from above. I had booked the sunset premiere ticket to see the new gallery of windows and mirrors floating above the city that had just opened the previous month – the observation floors of One Summit Vanderbilt.

From the street, though, I only got one decent shot of Steinway Tower on my walk that day.

When Abdullah and I arrived at MOMA, truly lovely tiny snowflakes fell swirling on a light breeze – light, pretty flakes that didn’t stick, just fell and in a few seconds disappeared. I joined the line awaiting in front, yielding my space under cover to an older couple since I had my peacoat and hat.

The flecks of white intermittently caught on the coat and disappeared as we made small talk, masked, in the light snow awaiting the Museum of Modern Art to open on a Thursday morning. They came in from Princeton, where they lived. She had once been a docent at the MOMA. We chatted about NFTs, art, and compared NYC and San Francisco now to times past in the lightly falling snow until the museum let us in.

I had read about Joseph E. Yoakum and the retrospective exhibit at MOMA in The New Yorker and it sounded fascinating and inspiring. I mean who was this guy, who suddenly appeared on the art scene wholly composed as an exhibiting visual artist at the age of 76?

At the age of 55, I find myself running out of steam. Dad died and I handled it. My kid is grown and doesn’t want anything to do with me. Almost nobody reads my stuff or appreciates my art. Certainly far less than when I was at my peak. I keep making and writing because I have always done so, independent of an audience, but I grow weary of ignonimity. And here’s this guy … in his 70’s! 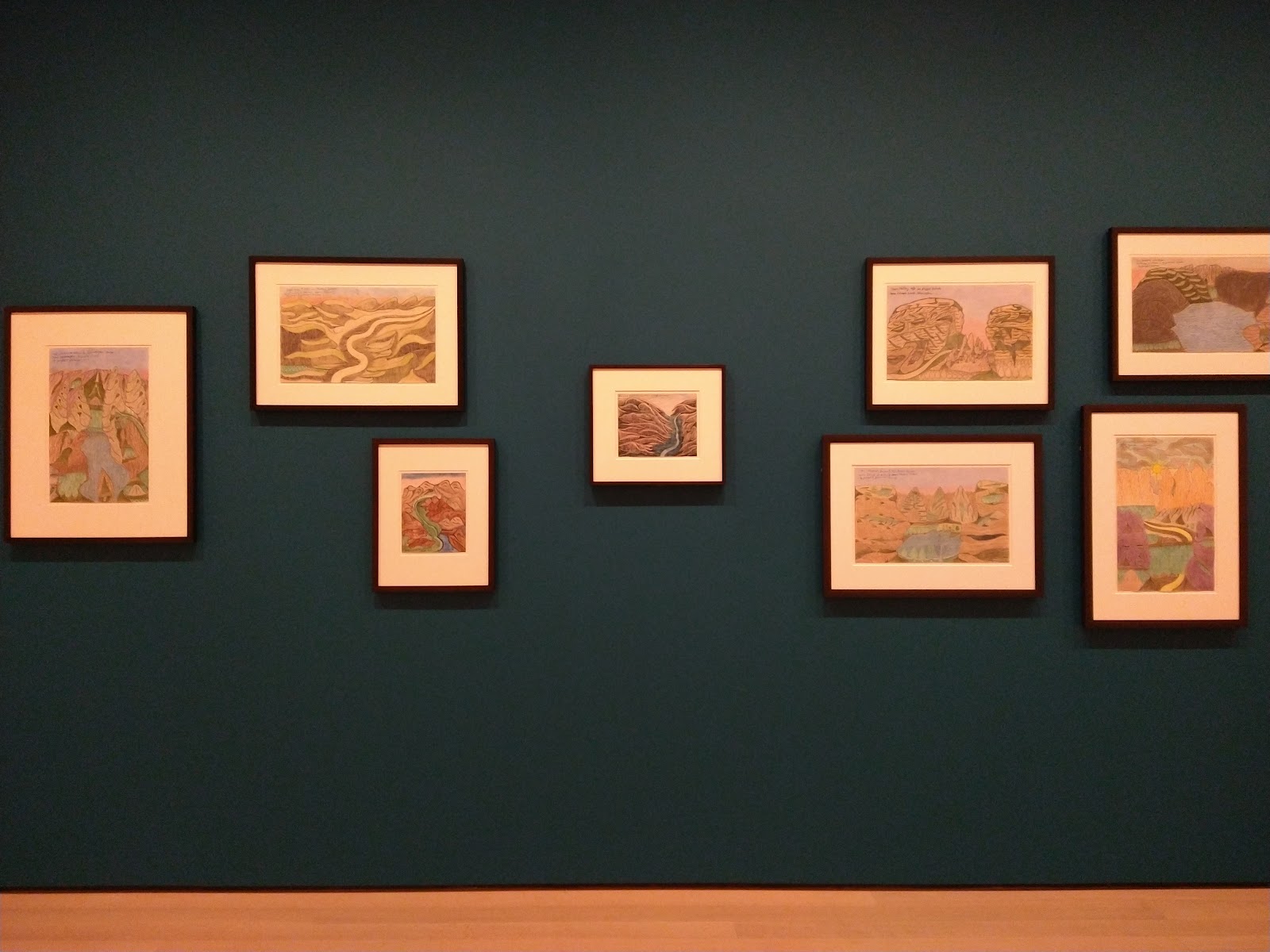 Joseph Elmer Yoakum (February 22, ca. 1890 – December 25, 1972) was a self-taught landscape artist of African-American and possibly Native American descent, who drew landscapes in a highly individual style. He was 76 when he started to record his memories in the form of imaginary landscapes, and he produced over 2,000 drawings during the last decade of his life.

They are mostly of small dimension, done with pen, pencil, ink and have scripted titles.

Yoakum started drawing familiar places, such as Green Valley Ashville Kentucky, as a method to capture his memories. However, he shifted towards imaginary landscapes in places he had never visited, like Mt Cloubelle of West India or Mt Mowbullan in Dividing Range near Brisbane Australia.

Drawing outlines with a ballpoint pen, rarely making corrections, he colored his drawings within the lines using watercolors and pastels. He became known for his organic forms, always using two lines to designate land masses.

It was a great show. I am glad I caught it. Afterward, I spent a couple of hours catching up with stuff on rotation from the permanent collection.

Saw a guy contemplating a Pollock

I also caught the last days of an exhibition of the work of Sophie Tauber-Arp, which was remarkable.

Sophie Henriette Gertrud Taeuber-Arp (19 January 1889 – 13 January 1943) was a Swiss artist, painter, sculptor, textile designer, furniture and interior designer, architect, and dancer. Born in 1889, in Switzerland, the daughter of a pharmacist, the family moved to Germany when she was two years old.

Some years later she began attending art schools, and moved back to Switzerland during the First World War. At an exhibition in 1915, she met for the first time the German-French artist Hans/Jean Arp, whom she married shortly after. It was during these years that they became associated with the Dada movement, which emerged in 1916, and Taeuber-Arp’s most famous works – Dada Head (Tête Dada; 1920) – date from these years. 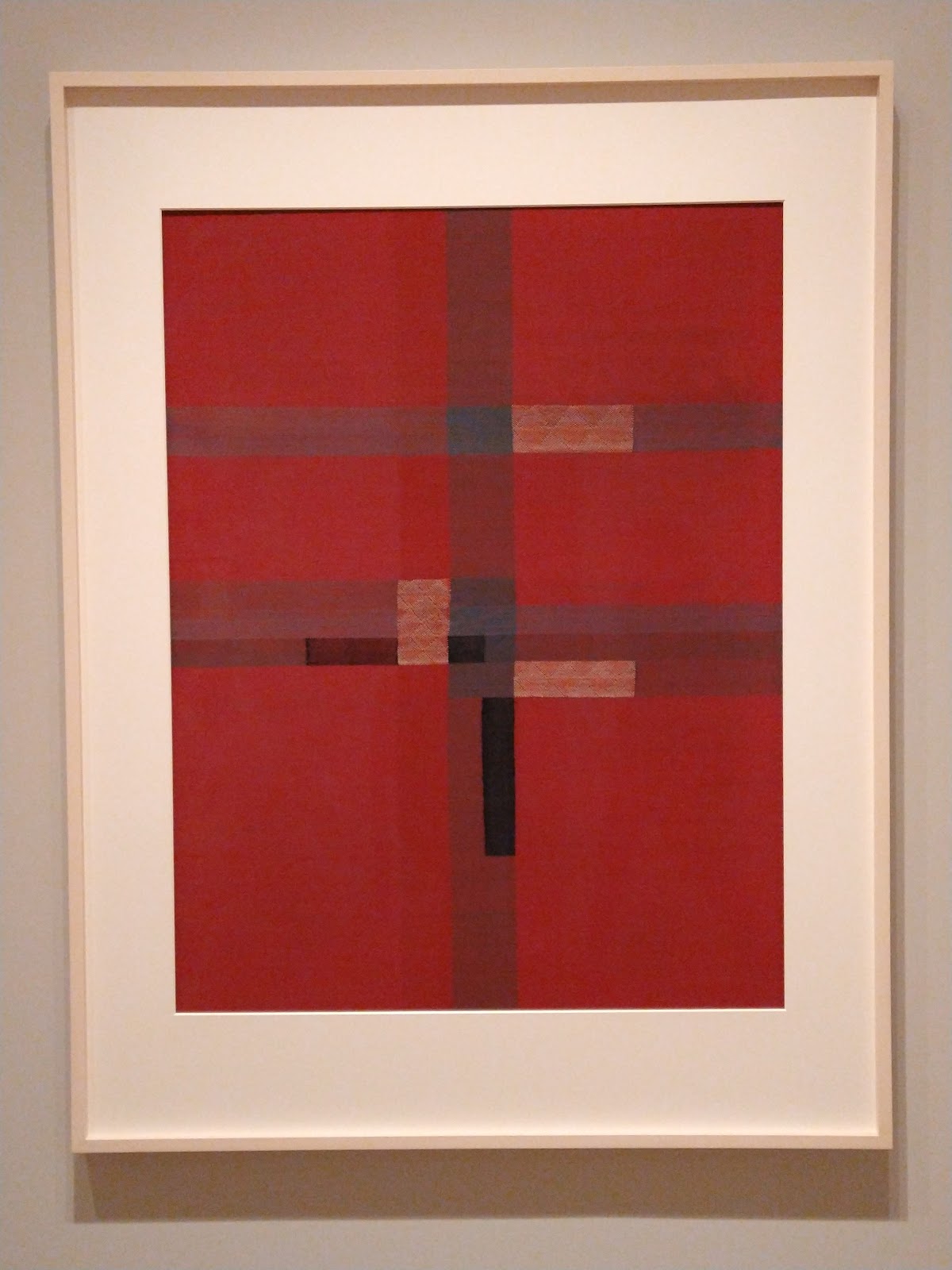 The weaving was first created for use as a tablecloth, to be seen from above and circumnavigated. In 1926, in an essay in Das Werk, the journal of Swiss Werkbound, an association of designers, the architect Hannes Meyer singled it out as representative of the “new world of forms,” that artists were creating for modern life.

Taeuber-Arp’s circles seem to hover over, perch on, or fall from the black lines. The green circle on the right appears to have been tossed in the air toward the edge of the canvas, directed by the skewed truncated line below it. Taeuber-Arp spoke of spoke of such play of circular forms in her work as boulisme (balls) or Petanque. The shapes seem to react to one another creating dynamic designs that give the impression of a freeze frame in an abstract film where the action has been temporarily arrested.

There was stained glass work that pursued the same geometric themes.

In the winter of 1918, Tauber-Arp was commissioned to produce marionettes and stage sets for an adaptation of the 18th-century play King Stag. These were particularly amazing.

The marionettes broke away from folk traditions in puppet making, in that puppets at the time were supposed to be as lifelike as possible. You were not supposed to see the way in which they were made, but Taeuber-Arp really left all of that visible.

Curator Lynda Zycherman added, “What is, I think, unusual is the shapes themselves depicting human bodies in geometric ways. The face painting is extraordinary. Sophie Taeuber-Arp traced the shapes in pencil and then painted in between the lines. And if you look closely at most of the facial features, you can actually still make out the pencil lines.”

The Arps moved to France in 1926, where they stayed until the invasion of France during the Second World War, at the event of which they went back to Switzerland. In 1943, Sophie Taeuber-Arp died in an accident with a leaking gas stove.

Despite being overlooked since her death she is considered one of the most important artists of concrete art and geometric abstraction of the 20th century.