Public art to commemorate “Bloody Thursday” at the corner of Mission and Steuart Streets in San Francisco. The four-day general strike in SF in the summer of 1934 led to unionization of all the West Coast ports of the United States: 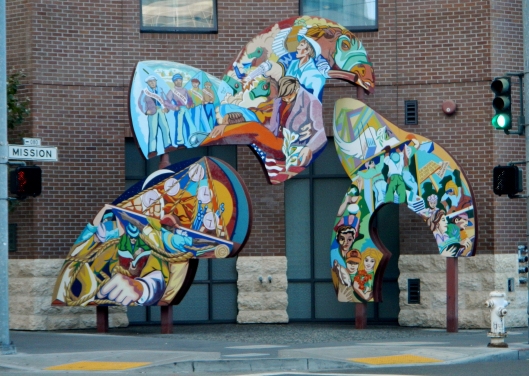 Painted in 1985 by an artist’s collective, this mural-sculpture was placed by the International Longshore and Warehouse Union near the previous memorial, this plaque:

When the Hotel Vitale was built in 2004, the sculpture and plaque were moved a short distance and re-erected, with the plaque now mounted on the wall of the hotel. (Source) 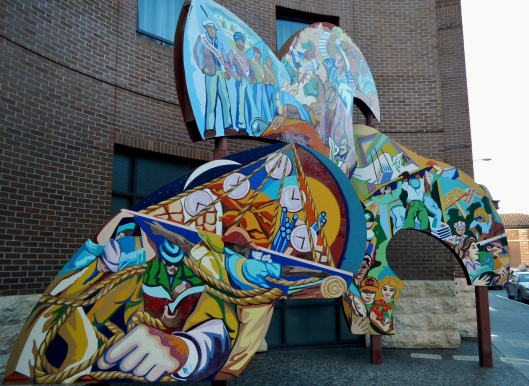 The strike began on May 9, 1934 as longshoremen in every West Coast port walked out; sailors joined them several days later. The employers recruited strikebreakers, housing them on moored ships or in walled compounds and bringing them to and from work under police protection.

Strikers attacked the stockade housing strikebreakers in San Pedro on May 15; two strikers were shot and killed by the employers’ private guards. Similar battles broke out in San Francisco and Oakland, California, Portland, Oregon and Seattle, Washington. Strikers also succeeded in slowing down or stopping the movement of goods by rail out of the ports.

The Roosevelt administration tried again to broker a deal to end the strike, but the membership twice rejected the agreements their leadership brought to them. The employers then decided to make a show of force to reopen the port in San Francisco. 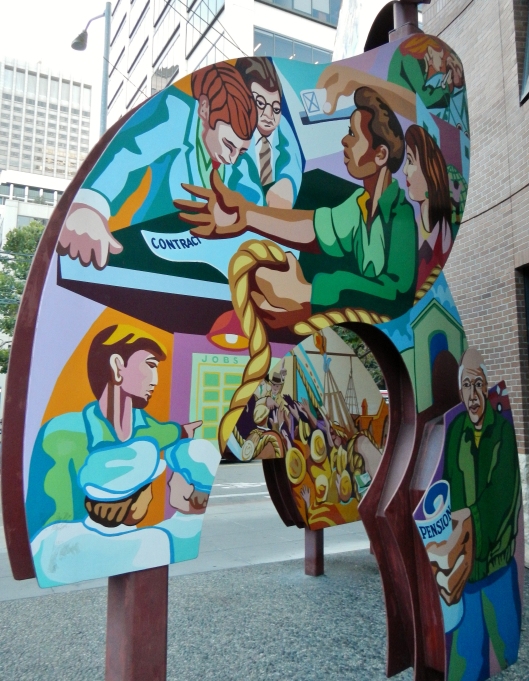 On Tuesday, July 3, fights broke out along the Embarcadero in San Francisco between police and strikers while a handful of trucks driven by young businessmen made it through the picket line.

After a quiet Fourth of July the employers’ organization, the Industrial Association, tried to open the port even further on Thursday, July 5.

As spectators watched from Rincon Hill, the police shot tear gas canisters into the crowd, then followed with a charge by mounted police. Picketers threw the canisters and rocks back at the police, who charged again, sending the picketers into retreat after a third assault. Each side then refortified and took stock.

The events took a violent turn that afternoon, as hostilities resumed outside of the ILA the kitchen. Eyewitness accounts differ on the exact events that transpired next. Some witnesses saw a group of strikers first surround a police car and attempt to tip it over, prompting the police to fire shotguns in the air, and then revolvers at the crowd.

One of the policemen then fired a shotgun into the crowd, striking three men in intersection of Steuart and Mission streets. One of the men, Howard Sperry, a striking longshoreman, later died of his wounds. Another man, Charles Olsen, was also shot but later recovered from his wounds. A third man, Nick Bordoise—an out of work cook who had been volunteering at the ILA strike kitchen—was shot but managed to make his way around the corner onto Spear Street, where he was found several hours later. Like Sperry, he died at the hospital.

Strikers immediately cordoned off the area where the two picketers had been shot, laying flowers and wreaths around it. Police arrived to remove the flowers and drive off the picketers minutes later. Once the police left, the strikers returned, replaced the flowers and stood guard over the spot. Though Sperry and Bordoise had been shot several blocks apart, this spot became synonymous with the memory of the two slain men and “Bloody Thursday.”

As strikers carried wounded picketers into the ILA union hall police fired on the hall and lobbed tear gas canisters at nearby hotels. At this point someone reportedly called the union hall to ask “Are you willing to arbitrate now?” (Source for text: wikipedia)