Mr. Quality Control is back. 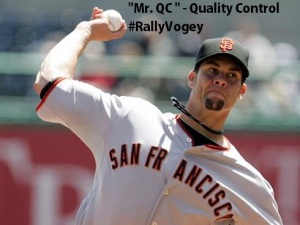 Vogelsong was truly #Vogelstrong, throwing just over 100 pitches, easing his way out of jams and holding the Dodgers to a single run. He out-dueled one of the Dodgers’ high value starters, Josh Beckett, went seven and an out, and looked controlled doing it.

When we won the World Series in 2012, Ryan Vogelsong was absurdly consistent. He had a quality start run of sixteen consecutive games in which he went at least six innings. And in that run, he allowed less than three runs a game, a machine.

Then last year Vogey had a rocky start. I think he liked being third in the order in 2012, and perhaps changing the order in 2013 and moving him down to fifth contributed to his struggles at the beginning of the season. His rhythm may have been disturbed by it, because he struggled with command and confidence, looked shaken and was getting shelled. He was asked if he was worried he might lose his place in the rotation. He responded with a glare, “Why would I?”

Then he had a decent game. It seemed like he might have turned the corner. So Vogey was just starting to find his groove when he had the bad luck to be hit on the hand while batting. Some bones in his hand were broken and he had to sit for weeks. It destroyed his rhythm and he never came back like the dominant pitcher he had been. (still, fuck the DH, that’s just NL ball).

In the off-season, all of this affected contract negotiations. But Ryan was happy to re-sign and get back to doing what he likes to do – pitch. And now we know some things about what he needs to do the job well.

Ryan Vogelsong seeks order. He eats the same thing before every game: #RallyEnchiladas. Vogey needs to find a season-long groove. He likes consistency so he can be consistent. He has great command when he is comfortable and he showed it off against the Dodgers in Chavez Ravine last night.

The Giants executed the game plan to perfection last night in L.A. Vogey handed the ball off to Affeldt for a single batter, then Yasel Puig stepped up to the plate with one out and a runner on in a tied game. Puig is hitting .357 against lefties right now and in the low .290’s against righties. Bochy went to Santiago Casilla, #TheWorkhorse, who mowed him down in a dominating strikeout at-bat.

Casilla took care of business and worked the Dodgers into extra innings and in the tenth, the Giants drew a series of walks off Dodger reliever Jamey Wright and got RBI’s from Brandon Belt and Hector Sanchez: clutch hitting with Runners in Scoring Position.

A note must be made of the ridiculously crisp defense backing up pitching staff. The Three Brandons – Crawford, Hicks and Belt – are having fun and making great plays. It’s a joy to watch. (#TripleBrandonDP is a thing now).

Romo came in to seal it and acquire his eleventh save and The Workhorse, Santiago Casilla got the win, his first of the season.

I have come to the conclusion there are three horses on this team in the Year of the Horse: #TheBigHorse, Matt Cain; #CrazyHorse Angel Pagan; and #TheWorkhorse Santiago Casilla.

Last night’s win and Colorado’s loss put just a little distance between the Giants and the rest of the division. The Giants are in first by a game over the Rockies and by three and a half over the Dodggers.

Game Two today features Madison Bumgarner (3-3; 3.18) versus Paul Maholm (1-2; 4.70), a match-up that, at least on paper, favors the Giants but it depends on which Bumgarner shows up. I think he gets motivated following a performance like last night’s by Vogelsong.