I didn’t see this game, but I’m trying to make at least a placeholder on the blog for every Giants game this season.

From the papers I gather that Angel Pagan had a great game at the plate and running the base paths, with two singles, a steal and two runs scored.

Tim Hudson continues his steady, consistent pitching for the Giants. He went 7+ and allowed only one run. Huddy is averaging 5Ks a game!

The Giants won in their first Interleague game, 5-1, and the Dodgers lost in 11 last night so we are back in first place by half a game.

I happened to be at the game last night. The buzz where I was sitting centered around the Mike Morse homer in the 421 area of the park. A big blast! Hudson’s steady pitching–I believe he had a 5 pitch, 3 up, 3 down inning. Very cool to watch. Last but not least, Pablo legging out a triple with a thunderous belly flop into third base and no throw from the defense.

The Kuiper home run video, bobble head and interviews were fun too. Check out the Kuiper video —csnbayarea.com. Cheers 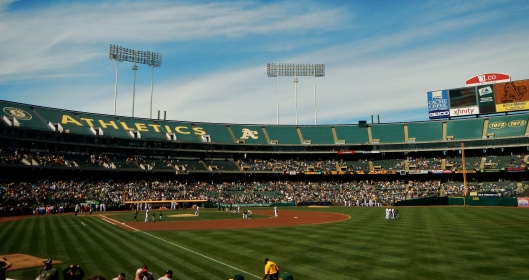