Between 2005 and 2011, I collected interviews with people about their first experiences with a computer (The First Contact Project) and

Here I mix them together for a final expression.

We’ve proved that the electronic voting machines are made by highly partisan private corporations and feel strongly that fraud has occurred. There are dozens of very serious cases, allegations and simulations of sheer electronic fraud, by reputable academics. There are allegations of vote theft – the outright changing of results … read this excellent summative:  http://www.wanttoknow.info/electronicvoting

And still as many as ONE-THIRD of U.S. votes are being cast into the black box of un-auditable e-voting without paper record trails. See who votes how here:

While this year’s presidential election has generated more interest than those in say 1996 or ’88, and perhaps even more than the Bush/Rove manipulations in 2000 and ’04, very few in the corporate press are preparing for what could be another utterly bogus presidential election night. The Republicans don’t need to actually win because they can negotiate the Democrats losing, and make the corporate press agree the polls were wrong.

“The Bradley Effect: that people won’t admit to pollsters that they didn’t vote for a black man” is already being paraded as an excuse, and races that are polling very wide are being portrayed as close! why? So it can be fixed again and presented as legit?

By contrast, many in the blogosphere of the Internet now feel that the outcome of the 2008 Presidential Election must be “either an Obama landslide, or definitively election fraud …” as it has been already identified in 2002 and 2004; including computer fraud via the alteration of votes in electronic voting machines, illegal vote purges and suppression in key states.

We have uncovered the exact ways in which HAVA (the “Help America Vote Act“) – forced county clerks in communities all over the country to rapidly accept UNAPPROVED Diebold, Sequoia and Premier electronic voting machines. We have testimonial after testimonial – all over youtube – complaining of what looks like rigging or suppression of votes. The outright changing of electronically cast votes by an exceptionally simple and quick hack is alleged nationwide. See these 3 movies on the facts:

So, on election night, what are we going to do? be transfixed by the corporate media? by Karl Rove’s fat face telling us a state has “flipped” from blue to red? or a “Too Close To Call” tuesday night and then a fixed election wednesday morning? how are we as a people to prevent election night and indeed our whole election process from being an utter joke?

Don’t let surprise turn into silent acceptance of a coup on election night.

Brad Friedman started with that attitude. The one-man election integrity super-blogger has been pursuing issue after issue in an organized fashion for the past four years. www.bradblog.com is indispensable now from the standpoint of election integrity awareness. It’s possibly the single best place to go on the day after election day to follow up on a priori complaints.

Black Box Voting, begun by Bev Harris, pursues similar goals – they are at www.blackboxvoting.org – and have begun a campaign they call: What to Do on Election Night “Protect the Count!” that advocates taking your video cameras where votes are stored on election night and being prepared to spend the night.

From the standpoint of long term solutions, so we can get together after this election and write the un-HAVA [maybe we could call it SAVA, the Secure America’s Votes Act]  and have it passed by the new Democratic President and Congress, here’s one: Open-Source Voting http://openvotingconsortium.org/ It’s endorsed by many who care, as a good way out of the nightmare HAVA has produced.

“But MTK … ,” you ask, “ … all that’s fine and good, but what are we gonna do if it’s election night and they are freaking rigging the election and shoveling a result down our throats via the Corporate Press with bullshit numbers, un-investigated mysterious vote-shifts and hundreds of thousands of purged and missing ballots, again?”

First, I think be very open-minded, slow to judge and aware. Second, why not be prepared to bring the government and the press to a halt on Wednesday the 5th of November if necessary – a stoppage of the process for investigation. In all seriousness. Be prepared to say you do NOT accept a concession by any party or any interpretation of the votes by any government body without a full Congressional Investigation into the Election. Imagine headlines in the Times that read Election Fraud Alleged … Public Demands Results Be Investigated, and subheads:

do NOT certify any election where voters claim the process was interfered with.

demand the right for a re-votes, tell people to prepare for a second ballot if necessary and entire re-votes of counties and states should be encouraged if necessary

Other than that … get ready to tell the people who want to take this country over illegally again that that isn’t what democracy looks like, ‘cause that’s what we will be doing. And it may take months.

mtk on the mic

!ting was the name of the first audio magazine I ever conceived of and produced. It was made with Brent Kirkpatrick, Gordon Borsa and several other volunteers – an edition of 5,000 half-hour ( fifteen-minutes a side), cassette tapes to be placed on subways, park benches and buses all over New York that looked like this: 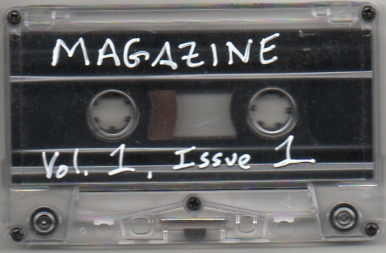 The concept was to collect sounds from the five boroughs in, under and around NYC in Spring of 1998 and eventually in each season to see if there were distinct seasonal changes in the soundscape.

Produced by new friends, meeting in Greenpoint, Brooklyn, for the first time, we created a voicemail for people to call and leave feedback which connected to a onebox e-mail account.

Here is a ten-minute excerpt of the audio with text describing and captioning content :